For those who have followed my blog and aromatic musings you will know full well the heartfelt disappointment when the (expensive) Osmanthus fragrans trees I planted in the summer of 2012 failed to produce anything. It appeared that I had been sold the wrong variety of plants as they seemed misnamed. Today (Easter Monday) there had been a light shower and I was showing some visiting out of town friends the growth and plantings in my garden since they last visited more than a year ago. Low and behold I was met with the most precious site of hundreds of tiny pinhead sized white flowers and the most divine aroma wafting up in the soft breeze. My osmanthus has flowered!!! Closer inspection showed that the bush was covered in the flowers-only one bush in the hedge of 5, but it was a great sight.

I was able to pick approx 2/3 cup of flowers which are open or almost open. there are plenty of buds so will have more to experiment with over the next few days. They weight 31 gm and smelt distinctively osmanthus- sweet and heady. I like to listen to music while I distil so i played New Order "Ceremony' from their 1987 Album Substance. 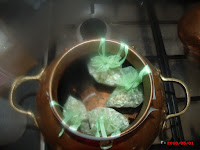 For this very first distillation I decided a steam rather than water distillation would be best, given the delicate nature of the flowers. As I only have a small copper alembic still the only way i could separate the flowers from the water and have the steam traversing through was to put into little organza bags and tape to the side of the still with duct tape. I filled the base with 1 L boiling water and sealed the unit and turned on the gas at 1228 hrs. By 1231 hrs fragrant distillate was coming out. I removed 350 ml as it was starting to smell less strong and stopped the still at 1250 hrs (total 22 mins.) after a further 10 mls. of quite weak smelling hydrosol came out. I always filter and the distillate was lovely and clear. Unfortunately all my pH meters decided to be on the blink, and I had run out of litmus papers so I can't measure the pH. 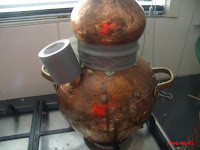 When I removed the little organza bags they were still very fragrant so I thought there was perhaps a bit more I could so I immersed the bags into the remaining water left in the still plus returned the last 100 mls  of hydrosol to the still and continued to distil for another 10 minutes to see what happens. The aroma was slightly heavier and not as sweet but still distinctive. Next distillation in a few days I will do a water distillation...watch this space!
Now outside it is sunny and the air is filled with the sweetness of osmanthus! I found this blog which nicely describes the fragrance of osmanthus with some nice pictures (i am not associated with this blog in any way). Most osmanthus sold seems to be as an absolute (solvent extracted) rather than an essential oil.
Thanks for reading
Wendy